Rolls-Royce has confirmed it is in talks with Chinese state-run firm China General Nuclear (CGN) over providing essential systems for a new power station in the UK.

The plant will be based at Bradwell, on the River Blackwater in Essex.

The project is one of three new nuclear schemes in this country in which CGN is centrally involved.

Rolls-Royce already has an agreement with CGN's subsidiary, CTEC, to develop and sell reactor control systems for selected projects in China and on international markets.

The planned new "Bradwell B" power station is a major component of the government's nuclear strategy. The country's existing reactors are ageing and all of them are due to shut down by 2035.

The Essex site is already home to an obsolete nuclear power station, which closed in 2002.

Its replacement was one of six new nuclear plants which were lined up in recent years to help meet energy needs in decades to come.

However, three of those projects have since fallen by the wayside.

One, at Moorside in Cumbria, was in effect cancelled in November after its backer, the Japanese firm Toshiba, decided to wind up its nuclear business in the UK.

Two more, at Wylfa Newydd on Anglesey and at Oldbury in south Gloucestershire, were put on hold last week. Their main backer was another Japanese firm, Hitachi.

It said it had failed to reach an agreement with the government on how the projects would be funded. 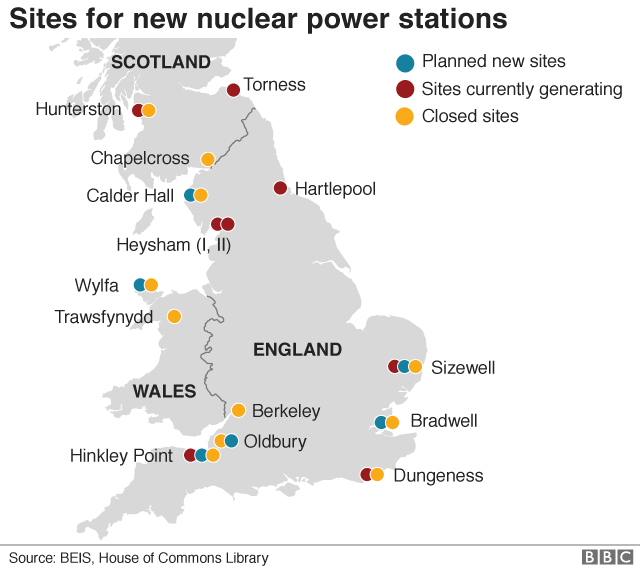 CGN is now playing a central role in all three remaining projects.

It is providing one third of the funding for the new Hinkley Point C, which is currently being built by the French firm EDF.

At Bradwell, it will be the lead contractor, with EDF becoming the junior partner. It plans to use its own HPR1000 reactor design.

The two are also expected to collaborate on another project, at Sizewell, in Suffolk.

For Rolls-Royce, the talks represent an opportunity to expand its relationship with CGN and CTEC.

Its instrumentation and controls business, based in the French city of Grenoble, supplies systems used in reactors around the world, including a large number in China.

It already acts as a supplier to CGN, but under an agreement reached last year, it plans to work more closely with the Chinese giant in developing the technology itself.

But the extent of CGN's involvement in the British nuclear sector has attracted criticism from politicians and security analysts, who are worried about its links with the Chinese government.

There are concerns that essential infrastructure could be left open to cyber-attacks or that technology could be stolen.

Last year, a leading US security official reportedly warned the government against developing a close relationship with Chinese contractors, on the grounds that civil nuclear technology was being adapted for military use.

Some experts believe the involvement of Rolls Royce will help to allay concerns about the security of the Bradwellproject.

"It would be unacceptable to have a third party nation in control of critical systems. It needs to be secure," he said.